Black Veil Brides is an alternative rock band that was created in 2009. It's lead man, Andy Biersack (who is the only one left of the origial members.) created the band with friends in Cincinnati, Ohio.

The has released 5 studio albums and in fall 2019 they will be re-recording their first album, "We Stich These Wounds", for its tenth anniversary which will be released next year. In interviews, Jinnx said that are reconding a new song and will be the same sound from their album "Vale." 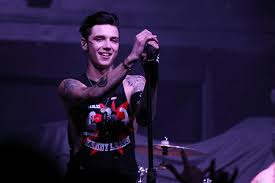 Here is one of my favorite songs by them.